Well it's official. This was the second driest summer on record here on the Vineyard. Lots of thunderstorms would swell up on the mainland in the afternoons, but they never made it across the water. Yesterday when I composted the garlic beds in preparation for fall planting, I was turning what amounted to dust.

So it was appropriate that yesterday I received the last of my birthday presents ... a faucet INSIDE the garden gate. Matt from Hide-a-Hose came by and in no time had my faucet in place. It is amazing how this equipment works. It has a big slicing blade that slices through the lawn and simultaneously drags the 3/8 inch pipe into place. 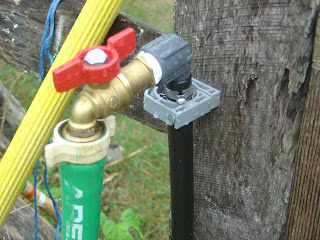 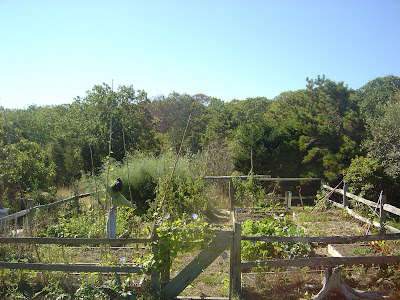 Posted by Leslie at 8:34 AM No comments:

From Mr. Zack to Ms. Zac

My friends from Walatoola sent me an article from the Washington Post that my friend Brenda had mentioned in Comments that offers some new insights into our good friend, Big Zack. First I stand corrected: His name is really Big Zac named after Minnie Zacarria of Long Branch, NJ. And maybe “he” should really be “she” in deference to Minnie and her “lasting contribution to mega-tomatoes.” If you are at all interested in the sport, check out The Making of a Monster. 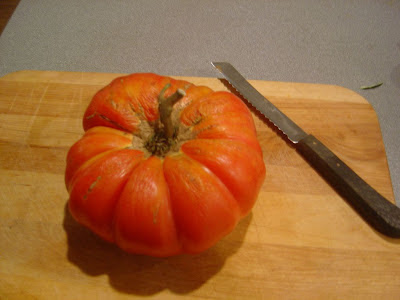 Posted by Leslie at 8:10 AM No comments:

It is that time of year when the garden is on the wane. Only a few tomato plants are offering fruit and even those are being handed up with black spots here and there. Those crops that do look toward fall … the kale, Swiss chard, rutabaga, Brussels sprouts and spinach … are still far from their full autumn promise. 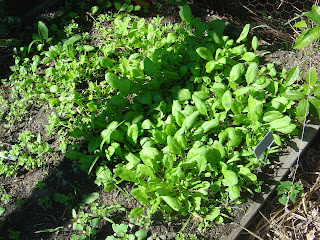 I am growing 5 varieties of spinach this fall in the hopes of getting some of it to over winter. The varieties I planted are Space Hybrid and Olympia Hybrid from Fedco; Melody F1 and Nobel from Peters Seed and Research and a Geant d’Hiver from Vilmorin seeds in France. This is the shadiest bed in the garden and getting darker by the day, but maybe next June that will have a payoff.

I have three artichoke plants growing in a bed just outside the north end of the garden. I have 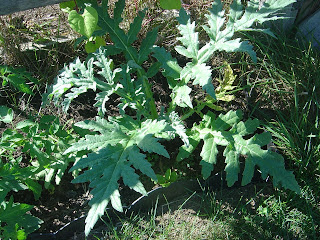 two Northern Star and one Emerald, and I will try again this year to overwinter them. They were put in the ground VERY late this year … late June. What I am hoping is that I can surround them with hay bales and cover with some windows I have in the basement. Northern Star, in particular, is reputed to handle northern climates as a perennial. The package says:

The first hardy Green Globe artichoke bred to overwinter and spring harvest in more northern locations. Good uniformity, better than most other Green Globe Artichoke strains. The only selection we’ve tested that has survived sub-zero temperatures without protection. Winter hardiness is a complex matter so we offer this for trial only – no guarantees. May-June sowings will generally produce the following spring (April-June 300 days)

We shall see. This will be my third attempt to over winter artichokes. 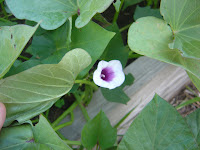 The sweet potato vines look strong. Every now and then I will spy a little sweet potato flower. They usually do not show themselves until after Labor Day here. And speaking of vines … the morning glory vine on the gate has decided to EXPLODE with blossoms. That vine has waited all summer to throw out a blossom and now it is festooned. The last of the tomatoes 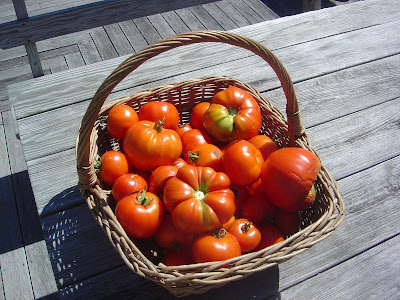 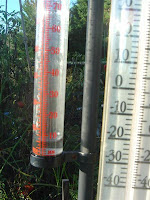 Well FINALLY, some rain. It has not rained here since the before the Fair. This quarter inch is welcome, but clearly not enough.

Meanwhile, I gathered up the last offerings of red tomatoes and made another few quarts of tomato sauce. The other thing I have been doing with my extra tomatoes is making a Greek Salad that is just perfectly put together. I found the recipe over in Kalyn’s Kitchen and have made it at least five times this season. The smell of fresh mint and lemon fill the kitchen all morning as the herbs blend with the tomatoes and the feta. Here are the ingredients: 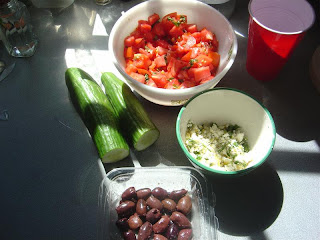 Posted by Leslie at 5:47 AM No comments:

Big Zack Turns Red and Makes His Way to the Table 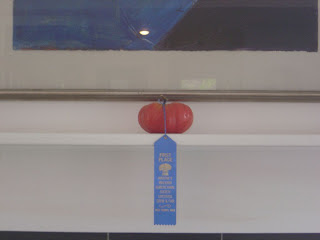 After gracing my mantle for almost three weeks, dressed in his tidy blue ribbon, Big Zack finally made his way to the table Monday night. I was not expecting much in the way of flavor given the fact that he had ripened indoors, and I was pleasantly surprised. He rivaled the Italian Sweet for genuine tomato flavor. Once again Big Zack proves himself to be a true champion. 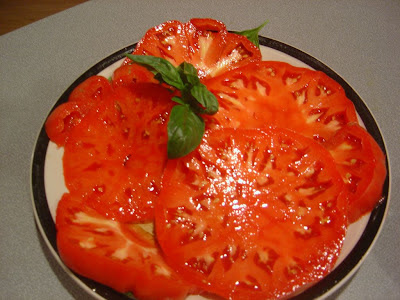 If you were to tiptoe out into my garden early in the morning you might well over hear a conversation among the other vegetables "You know ... she likes the tomatoes best." Well there ARE other things in this garden besides tomatoes.

So first there are the eggplant. They had a devil of a time setting fruit. I fed them some calcium and that (or maybe just time itself) seemed to set them straight. But only one of the three plants had adequate sun ... shaded as they were by ... you guessed it, the tomatoes. 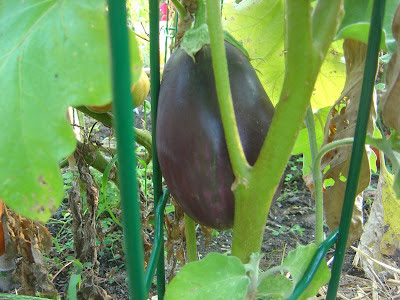 My basil has done better than EVER this year. Usually by mid-August it is woody and bitter. It is still lush and supple. I wonder if planting it next to a row of green beans helped act as a windbreak. 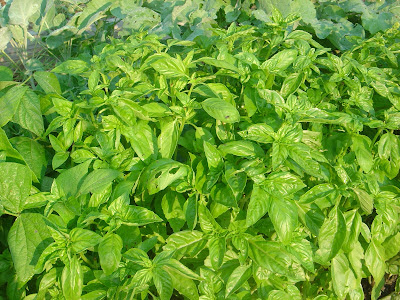 And then there are the winter squash. Say hello to the Winter Squash Class of 2007. On the top stair are two Candy Roasters and two Winter Luxury Pumpkins. And on the bottom stair are supposed to be BABY Blue Hubbards except that one of them didn't know he was a baby. Wish I had planted some Butternuts. 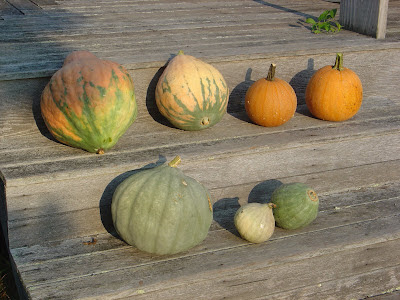 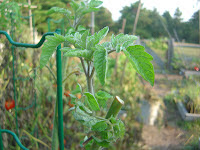 This year's tomato harvest was the best ever. The problem is, they all ripened at once. The humidity of late July and early August caused a leaf browning and interfered with new blossoms. So I have very few green tomatoes out there to sustain me through September. So I have been experimenting with rejuvenating some of the old plants. I don't expect I will see anything red by first frost, but the project will teach me something about how to manage such a process earlier in the season.

So what varieties worked well this year? I think Little Mama is one I will definitely try again. They produced long plum tomatoes. And I would like try my hand at Principe Borghese even though the plant struggled all season long. And the Costoluto Genovese was a lovely looking tomato. 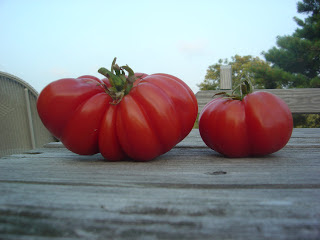 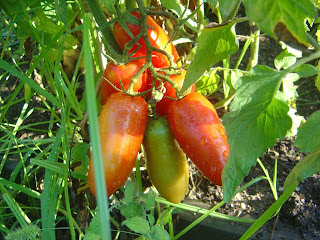 Little Mama
The Better Boys are so reliable. They will always have a place in my garden. And the Boxcar Willies were and still are great producers this year. And the 8 or so Italian Sweets I got from my 3 plants were certainly worth it. They are ALWAYS the best tasting tomato in the garden. 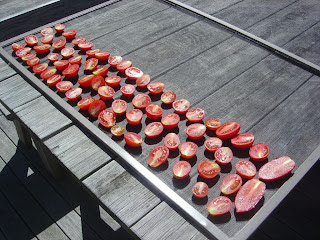 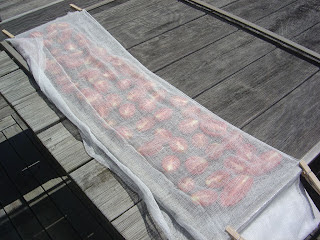 The final OLS meal this week focused around grass fed beef from the Allen Farm. It was adorned with Morning Glory Farm corn plus tomatoes, green beans and potatoes from the garden. A special thanks to Liz at Pocket Farm for challenging us all to put action behind our intentions each week. And Week #10 of OLS means that it is time to START this year's September Eat Local Challenge 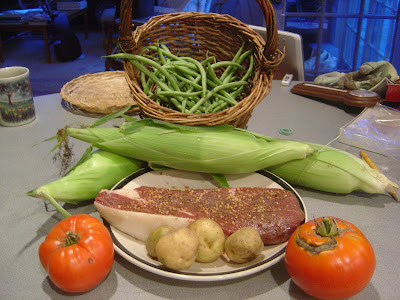