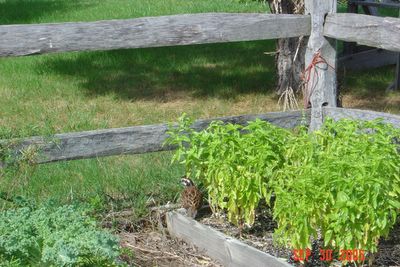 Bobwhite in the basil

Posted by Leslie at 6:18 PM No comments: 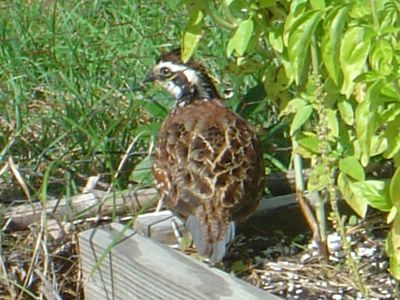 a closeup of b in the b

Posted by Leslie at 6:05 PM No comments: 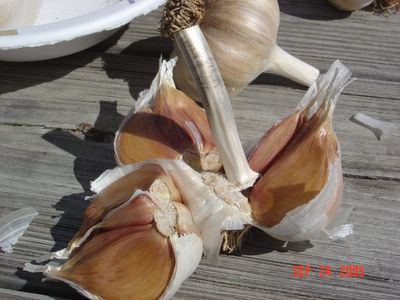 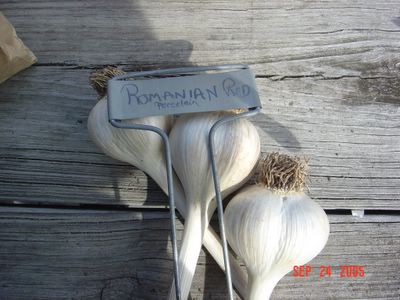 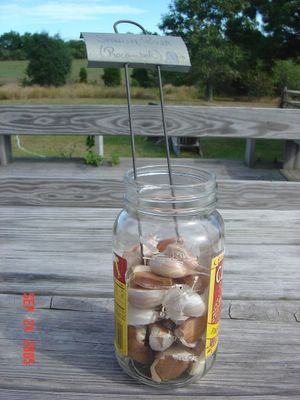 Garlic planting has begun in earnest. The final preparation of the beds involves using long sticks to mark the ground of the beds in 5x7 squares. (The recommendation is for 5x8 squares. Last year I planted 5x6 and I think they were too close.) The garlic will be planted at the intersection of the lines. 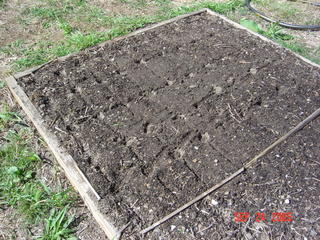 I stuck my thumb in the intersection and brought up only dust ( it is still so dry here ) so I used my dish soap bottle filled with water, and squirted water into each hole. It is a very handy tool.

I decided to plant Spanish Roja first. It is a Rocambole that is unfailingly my best garlic year 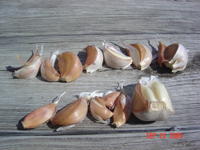 after year, so why not plant lots of it. I began by opening my two Ag Fair entries, the biggest and best I had. Inside the first head, I found 13 cloves of which only 7 were plantable. One clove was rejected because it was too big and was a double clove. Double cloves send up two plants neither of which does particularly well. The other cloves were too small to plant. Size of clove is related to size of next year’s heads. In the end it took 6 heads of Spanish Roja to plant 40 cloves. 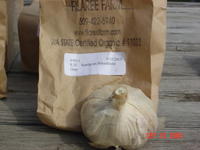 I only have one other Rocambole and that is a new one from Filaree Farm called Sandpoint. I opened the bag and to my surprise one quarter pound of seed garlic = one head, and a huge head it was! I was able to get the 10 cloves needed to give me one row of Sandpoint.

Next I moved on to the Porcelains. The Porcelains are characterized by having only four, sometimes five, cloves per head all of which are suitable for planting. I began with Romanian Red.

This planted about half of a 4x8 raised bed. I always end up with more seed than I can plant. This leads to lots of loose cloves around that need to be used. Since I also have lots of loose basil around, I’m sure to make pesto. But the best use for loose garlic is bagna cauda. It involves bathing the garlic in wine and oil and then dipping either bread or artichokes (in Northern Italy they use cardoons)

Serve with cooked artichokes and other vegetables such as spring onions, new potatoes, radishes. Also need a loaf of crusty bread to catch the drippings.

Cut each garlic cloves into 5 or 6 thin lengthwise slices. Place the garlic in a medium saucepan, add the wine and set over low heat. Simmer 10 -15 minutes until the garlic begins to soften. Meanwhile melt the butter in a small saucepan and stir in the anchovies. Simmer 2-3 minutes until the anchovies begin to break up Add the olive oil, heat through and stir the mixture in to the garlic and wine. Simmer the sauce for 3-4 minutes and set aside.

Set a stand with a candle and place the heated sauce in the container. Surround with the vegetables and bread. Use the bread to catch the drippings from the vegetables
Posted by Leslie at 9:53 AM 2 comments: 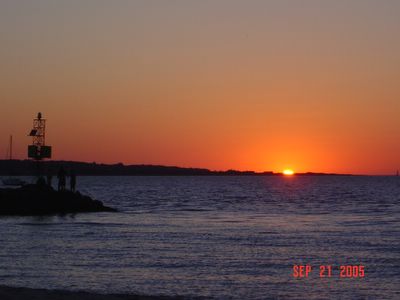 Posted by Leslie at 9:55 AM No comments:

locking, unlocking, and the equality of day and night

Ah the equinox!  I discovered last year that from my bedroom porch, the sun rises directly over my stone birdbath on the morning of the equinox… a kind of personal Stonehenge. In spring it promises longer days than nights.  In fall it promises relief from summer heat and the colors of fall not far behind.  It is also the day that fall begins and is supposed to last until December 21.  Now that is really pretty crazy when you think of it.

I believe it was Kurt Vonnegut who proposed 6 seasons instead of four, and I find his logic quite compelling.  Here is the idea.  May and June are spring.  July and August are summer.  September and October are autumn.  Now here’s the change.  November and December would become the season called “locking.”  Locking is what the outdoor world goes through to get ready for winter which comes in January and February.  Then March and April become the season of “unlocking” when the buds start to come out and unlock from winter.

One of the wonderful signs of fall here is how the geese seem to awake with the sunrise and set off on their morning flight.  I am still in awe of living in a place where the world is quiet enough that I can hear the whistle of wings when they fly overhead.

Now here’s another one of those existential questions that really isn’t so existential because it CAN be documented.  When do the cicadas stop chirping in the evening?  Is it the first frost, the first hard frost?  I guess because I close the house up when it gets cold, I don’t listen for their absence.  In the spring we mark the advent of spring with the sound of the pinkletinks.  It gets reported in the paper (like the first snowdrops usually in Tom Hodgson’s yard), but nobody ever reports to the paper that they stopped hearing the cicadas.

I see that there are four doves on the lip of my birdbath where there is precious little water in which to bathe.  I shall go and tend to them.
Posted by Leslie at 6:07 PM No comments: 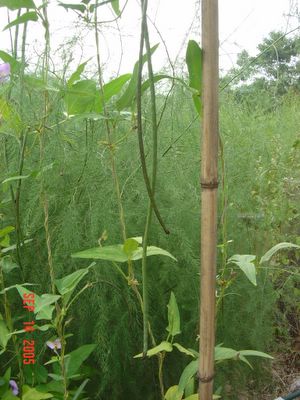 Yard-long Asparagus Beans against a backdrop of ferning asparagus.

It is that special time of the evening when I watch the shadows move across the field and feel the southwest breeze pick up. On that breeze is carried the bleats of Allen Whiting’s sheep. Somewhere south of here Ophelia is spinning her clouds and swelling our surf, but now all is bright blue and nearly summer like. The equinox arrives soon and here it will be 6:32 AM and PM.

I harvested some potatoes for dinner last night, and this morning pulled a full 3 cups of basil leaves from the garden for fresh pesto. I was cheered in the garden this morning by the sound of 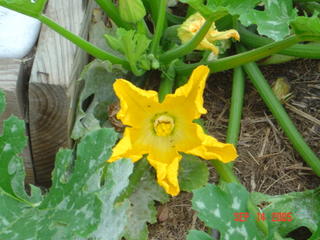 a bee working diligently on what few blooms she could find. I have to hand it to this one zucchini plant of mine that is still producing. Somehow it dodged the squash vine borer attack that laid the others low. I’m happy just to see it blooming still each morning.

Then there are the yard long asparagus beans. They are so named because they have the faint flavor of asparagus. And despite their potential for yard long growth, 12 inches is when they are most tender.

By the time I departed the garden this morning, I had a nice little harvest of squash, a fresh cucumber, eggplants and a few ripening tomatoes. 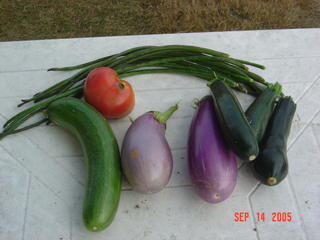 I have been drying my beans and will soon put them up in glass jars. The red ones are 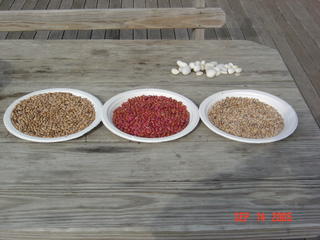 Vermont Cranberry Beans (many of which I ate as shell beans earlier) and the speckled ones are Rattlesnake pole beans. I’m not sure the beans are a good use of garden space. After all, what is cheaper in the store than a bag of dried beans?
Posted by Leslie at 5:46 PM No comments: 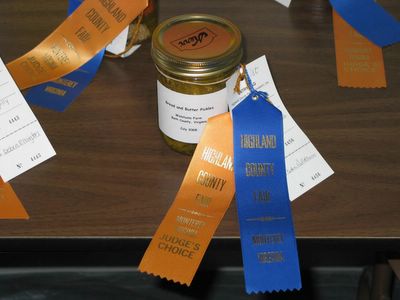 Posted by Leslie at 5:15 PM No comments: 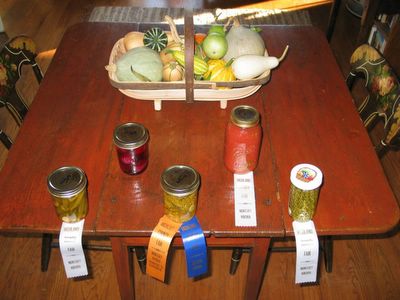 experts in canning too!

Posted by Leslie at 5:14 PM No comments: 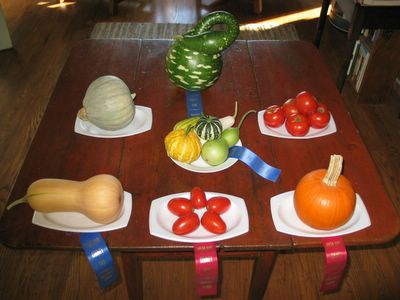 Hat's off to Walatoola Farm !

I think it is time to tell the story of my friends at Walatoola Farm in Bath County, VA.  One of the great joys of this growing season has been watching my friends Mike and Jim’s weekly progress in this their first year with a garden.  They monitor me here on my weblog and I monitor them via weekly farm reports sent to me by Jim.  These farm reports are a great joy and include a PowerPoint slide show.  Despite the miles that separate us this summer, I’ve never felt closer to these friends than I have this summer.

Where I have pretty much consumed as I harvested, they have done a splendid job of preserving their harvest both on the shelf and in the freezer. Their season of hard work and adventure was paid off last weekend at the Highland County Fair where they took ribbons too numerous to mention (but the photographic record can speak for itself.)

I raise my digging fork to you, my friends.  Congratulations !
Posted by Leslie at 5:04 PM No comments: 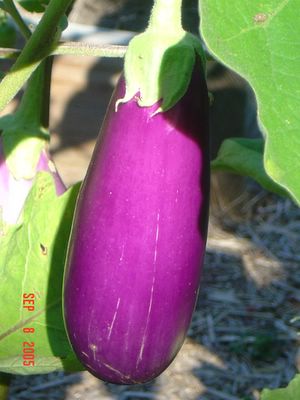 Posted by Leslie at 4:47 PM No comments:

Keeping faith with my spinach

I guess I should have planned better. There certainly COULD be a producing garden out there right now if I had planned ahead. Some broccoli, some fall peas, even some late maturing tomatoes. It’s like someone came in the middle of the night last week and let all the air out of my garden. I have a few yard long beans each day and some lingering cherry tomatoes. But that’s about it.

The spinach I planted nearly three weeks ago is not performing. I have one or two plants showing and I suspect they were from seed that fell rather than seed that was planted. I probably planted the seed too deep and too dry. So I keep watering diligently hoping for sprouts. 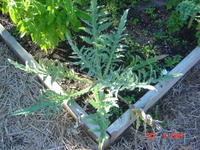 Also in the realm of failures is the artichoke plant. Lots of spiky leaves, but no stalk … and time’s a wastin’. I’ve heard that people grow them successfully as far north as Maine, so I’m pretty sure I’m dealing with a nutrition issue here.

But enough of failure. There is a nicely maturing row of rutabaga and some good looking parsnips. The kale is enjoying the cool weather and there is lots of basil waiting to be made into pesto. I have a spectacular eggplant called Neon that is lighting up the back row. And what about that zucchini plant that is still putting out flowers and fruit. I’ve never had one go so long into the season.

We have had a run of simply beautiful weather here for about a week now. We’ve given up worrying about how dry it is. I just water strategically in the garden and make sure the apple trees get a good soaking every 10-14 days.
Posted by Leslie at 4:39 PM 1 comment: