An artichoke in June ! 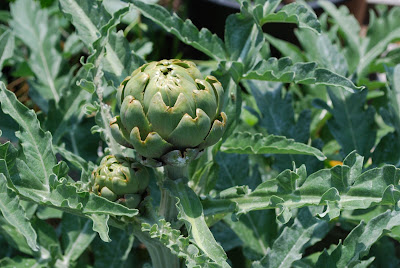 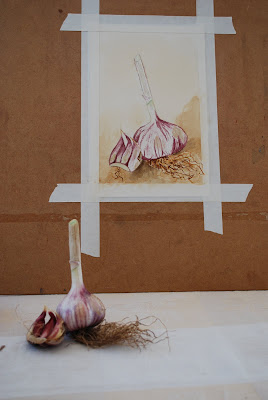 Here is a little rendition of a recently harvested Place Monge.
Posted by Leslie at 8:36 AM No comments:

click to enlarge
I am going away for a few weeks, and will not return until mid-July. Lots can happen in the meantime. I'll keep my fingers crossed.
Posted by Leslie at 8:21 AM No comments: 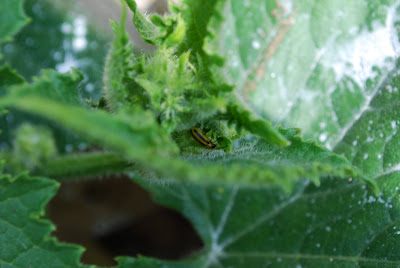 These little beetles have done a number on my cukes, melons and squashes. I responded too late with Pyola. I think I have them under control, but I am afraid I have lost several plants. But the tomatoes continue to thrive.
Posted by Leslie at 8:17 AM No comments:

And now it is solstice, that bittersweet reckoning of the gardener. I just came in from tying up my tomatoes. Everything out there is reaching for the sky. Up, up, up they go drawing nourishment from below and above. One of my runner beans actually made it to the top of the trellis today. Now what?

Well you can look for a hint in the garlic bed. Some of my soft necks are starting to bend over and I watch them closely for readiness for harvest. 4-6 dead leaves and it is time.

I am on my porch facing east taking in the solstice sunset from the obverse angle ... watching the shadows lengthen across the hayfield. I am aware that this time of planting and preparation is now at its zenith. Often when I am in the yard in say late April I will say to myself ... this is what the sun will be like in late August. In August there is a bountiful harvest ... even harvest fatigue ... but not so in the light of April. In that very same light, that very same exposure to the sun's angle and duration the garden is only barren possibilities. I comfort myself in those April moments that the days are still getting longer and the best is yet to come.

But today begins the undoing. It is a bittersweet moment.

Posted by Leslie at 7:09 PM No comments:

Turning up the heat 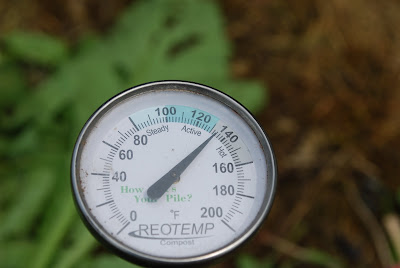 Well I think I have solved the case of the unwanted visitor in my compost pile. I simply gave it a good turn, added some activator, watered it well, and the next thing I knew it was too uncomfortable for the visitor to forage. If I can keep it humming at 130 degrees + all summer, I should achieve two goals ... good compost and no visitors.
Posted by Leslie at 5:14 PM 1 comment:

click to enlarge
Right now is an odd time ... odd in a nice way. The frenzy of preparation is over. The asparagus has been put to bed. 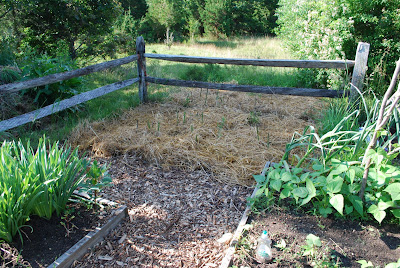 And the peas are a good week away from production. 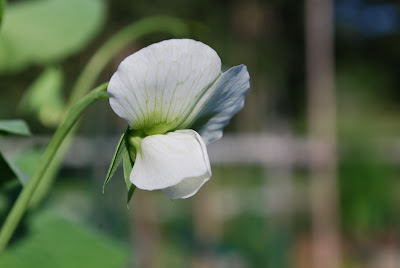 Each day the garden is getting taller, and all I have to do is water and watch.

The over wintered artichokes are putting up fruit. 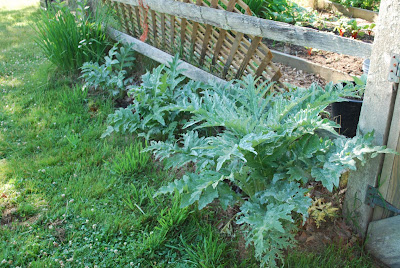 Meanwhile, I have made beds outside the garden for the ones I started from seed. 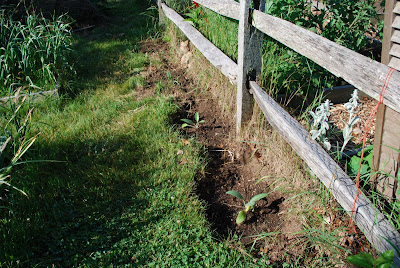 And I have transplanted one into a 15 inch pot with plans to overwinter in the basement. 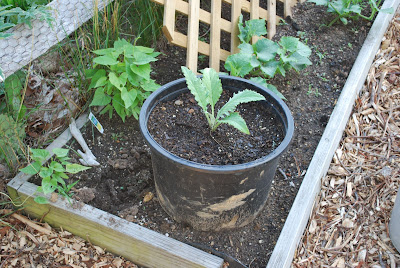 My other experiment involves growing a pair of French melon plants in a container far removed from the garden in the hope that their pollination will be uncontaminated and that I can use the seeds for next year. Now if I can just remember to water it. 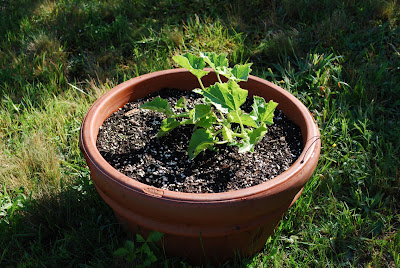 Posted by Leslie at 6:29 AM No comments: 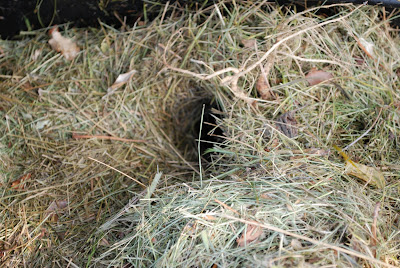 I need some advice about how to coax a critter out of my compost. Three years ago I bought a really sturdy black compost bin for my kitchen scraps complete with critter guard. For two years it was a fortress. Then one spring I returned to find a hole eaten into it and a completely rotated, aerated compost pile. The critter did not return until the following December, about the time I stop using the bin, so I decided on a live and let live attitude for this winter rental.

Well, this spring he/she has not abandoned the bin upon my return, but is still in residence. Not in residence exactly, but a nocturnal visitor let's say. I have read ideas about how to discourage visits ... keep the pile wet ... plant mint near the bin ... I even tried sprinkling a quart of cayenne juice on top of the scraps before covering.

Obviously I cannot plant mint overnight, but I did stuff some in the hole as a temporary solution. 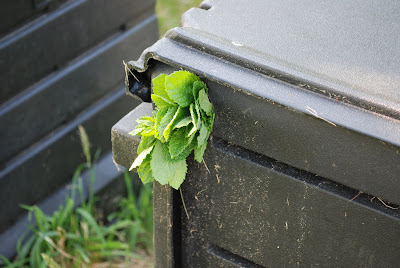 I am afraid that the critter of which I speak rhymes with cat, and I do not want to encourage visits from same. Anyone have any solutions, short of the obvious poisonous ones?
Posted by Leslie at 7:26 AM 6 comments:

From infancy to puberty in 6 short days

I had to be away for about 6 days. In that short time, the garden went from infancy to puberty. The tomatoes have weathered their transplant and are well established. 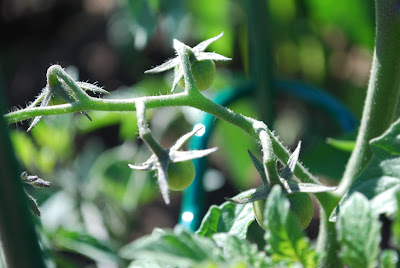 With the exception of the Killarney Red and the Chesnok Red, all of the garlic scapes have been harvested, and the plants are busy below ground now bulbing out. 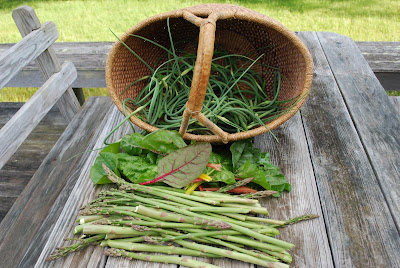 Perhaps most exciting was seeing the runner beans taking hold of the bean trellis. I can almost hear the lead leaf shouting over his shoulder ... 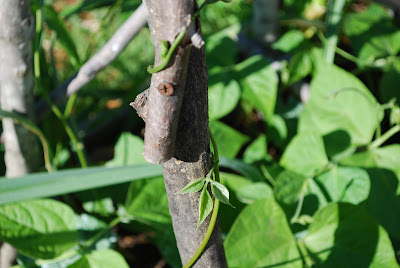 A gift from friends who know me well 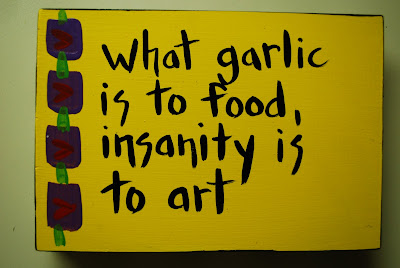 Garlic from head to toe 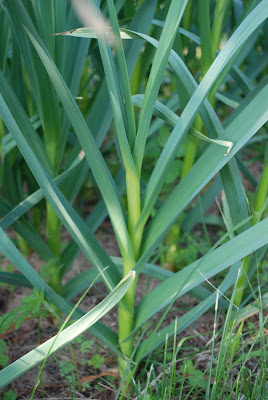 Here is a healthy garlic plant. It sports 10 leaves with a scape on top. (that little brown leaf on the left counts) When 4 - 6 of these leaves turn brown, it is time to harvest. Each leaf is a wrapper for the bulb underground and so you want 4-6 green leaves to ensure a tight wrap on the bulb after curing.

I look at my garlic everyday this time of year marveling at the differences among the scapes. Here is a classic rocambole curly scape. 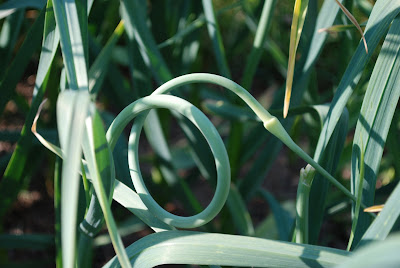 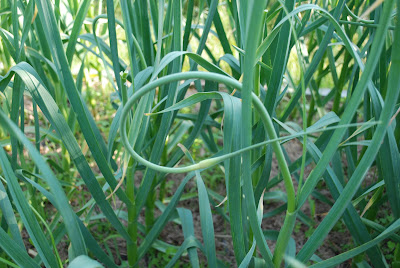 So I have harvested at least half of the scapes now and am storing them in the fridge. They make great stir fry and are wonderful additions to anything on the grill. You want to pick them once they have curled, but BEFORE they begin to straighten. It will send more energy to the bulb as these wonderful plants turn from scallions to full bulbs in less than a month.
Posted by Leslie at 7:28 PM 1 comment: 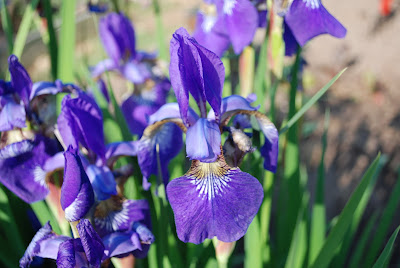 Well with a few exceptions, I can say that the garden is "planted out." It has been a struggle wrestling with weeds and grasses, but with some help from Hunter we have tamed the wild portions of the garden and brought order where there was chaos. 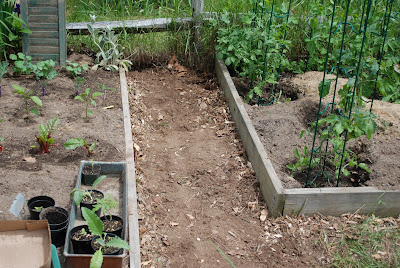 For this 6 feet of pathway, Hunter took out 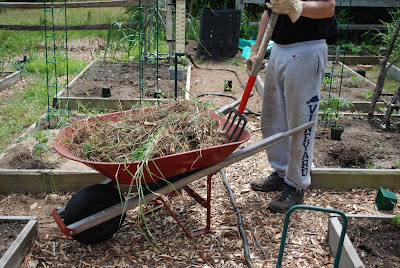 this wheelbarrow full of grass roots.

My plan this year was to focus on the two fruits I love the most ... tomatoes and a charentais melon grown in Cavaillon known as tranche de miel. In my decade of gardening there has never been a moment in which I have said "too many tomatoes this summer." I've done it with cukes and summer squash ... even with shallots, but never with tomatoes and certainly not with these amazing melons. So right now there are 39 tomato plants and 8 melon plants in the garden. 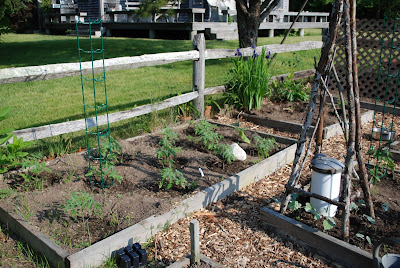 To make room for these I decided not to plant potatoes this year ... neither sweet nor regular. The store does a better job than I do. However, it happens to be my husband's favorite crop, so he is running a potato bin at the back of the garden with the last of the Red Norlands SBS had on the shelf. I also sacrificed Winter Squash ... I still have four butternut squash from last season in the basement. However, yesterday I did plant a few Waltham Butternut seeds at the east end of the garlic bed, and some Baby Pam Pumpkins at the west end. Maybe there will be a successful overlapping of the bed this year.

I still have some artichoke plants that will need a bed outside the garden, but I can work on that later. Also, I read yesterday that one CAN container garden artichokes and bring them inside for the winter. So I am off to find a few 16 " clay pots.

But it is pretty much tomatoes and melons as far as the eye can see. I plan to container grow two melons away from the garden, in the hopes that the seeds from those melons will not be tainted by cross pollination.

I have been having a cutworm problem ... attacks to newly sprouted green beans and some of my trasured melons, so I tried a little trick with hosta stems proposed by Daphne. 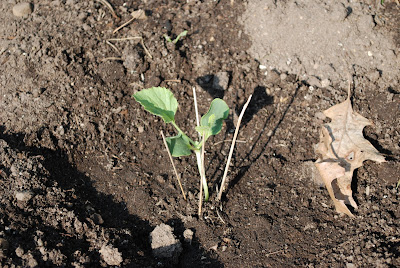 Elsewhere in the news: 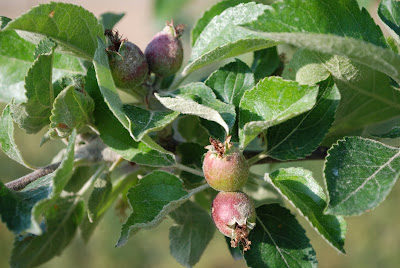 There was successful fruiting in the apple "orchard" this spring despite those surprise late frosts. Because of our exposure to cedar apple rust, I chose resistant varieties like Freedom and Jonafree. However there was one "experiment" in the orchard ... an Arkansas Black ... and it is sporting its first fruit this year.
Posted by Leslie at 6:16 AM 1 comment: