Coming back from the dead

On Saturday morning I went over to the arboretum to take a guided walk focusing on conifers. I haven't talked about it much in here, but the Polly Hill Arboretum has become an important part of my life. It is within walking distance through the woods, so I prefer walking there rather than on the local roads when I need exercise. Plus, in the summers, I volunteer on the grounds crew once a week. So when I take my walks now I can see the results of our pruning, or raking, or planting and have started to take a real sense of pride in the place.

When I emerged from the woods on Saturday morning, I was greeted with the smell of smoke. There had been a prescribed burn in the fields of the arboretum the day before and the charred black of the fields contrasted with the evergreens on the edges. Hopefully this program will reduce the scrub growth and help return the area to field without so much mowing. 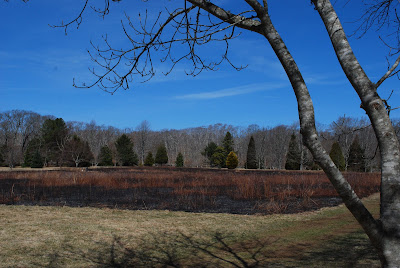 I learned all kinds of things on my tour, but for me the highlights were two conifers that are so rare that they were both thought once to have been extinct ... only to have existed in the fossilized record. The younger of these is this little Chinese Pine that was discovered in the mountains of China. It is so new that I cannot find its scientific name listed in the Plant Collections list on the arboretum's website. But here are some pictures. 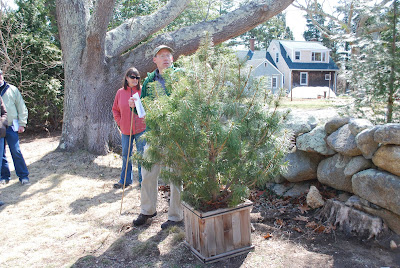 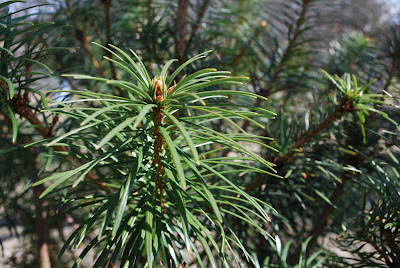 And there is also the Dawn Redwood, Metasequoia glyptostroboides. The complete story of this once declared "fossil only" is told by William Gittlen in his book Discovered Alive. In it he details how an alert forester in Central China in 1944 spotted this "new tree" and how its seeds were recovered by a team from the Arnold Arboretum and sent out to other arboretums for test growths. This tree in Polly's collection came from a cutting which Polly got in 1958 from Longwood Gardens. This species of conifer is the exception to the rule of EVERgreen. Like the larch, the Dawn Redwood sheds its needles in winter. That warning given, here she is - only one generation removed from the remote mountains of Central China. 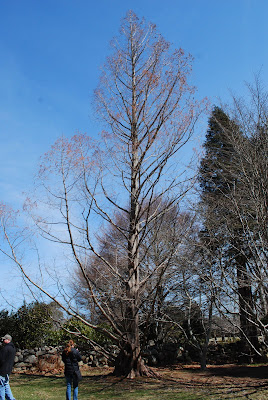 Arrived at the Tidal Basin a little before sunrise on Sunday morning. The city was swarming with 10K racers and all my tried and true parking places had become a racecourse. As the blossoms picked up the morning glow, I started to hear this piece from the Peer Gynt Suite in my head. I used the pile of photos to make my first iMovie with my new Mac. Enjoy.