The berries that sparkle in the sun this time of year add an amazing splash to the landscape. The orange of bittersweet, the stark red of winterberry seem to jump out all of a sudden and energize the landscape. I THINK it has something to do with the way they are set against the browns of this season's landscape. I find myself looking in to the woods as I drive around these days and actually feeling a comfort from the pairing of these colors red and brown. Soon enough we will be in the season of red and green, but Thanksgiving is a time of reds and browns. Feast on them and give thanks 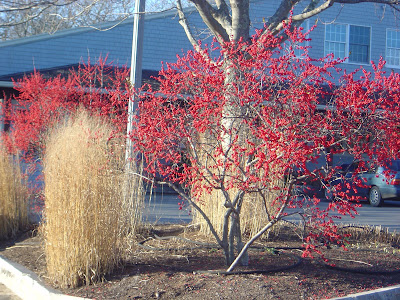 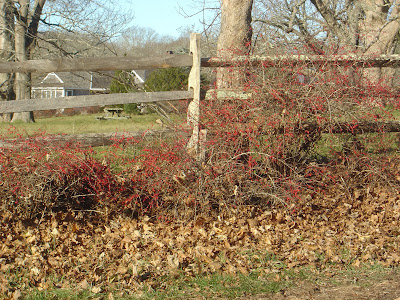 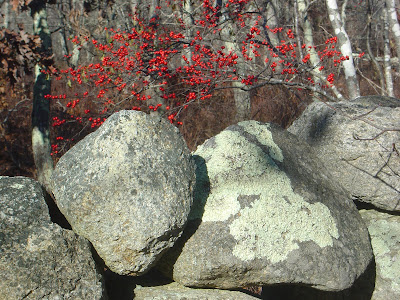 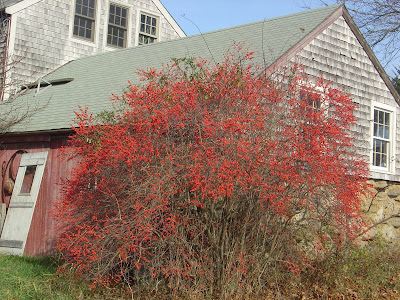 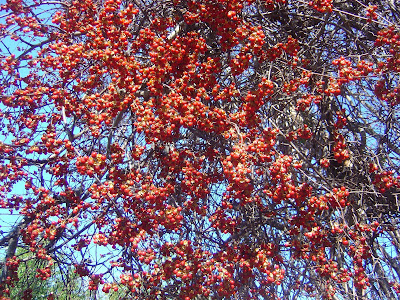 As my departure approaches I have been working my way through the bounty of the freezer.

One little treasure I acquired this summer when Flat Point Farm had their pastured chicken sale was 6 pounds of chicken feet. Yes, chicken feet. Thanks to two excellent blogs, Elise at Simply Recipes, and Kathy at Just the Right Size, I had a foolproof protocol for making this rich and delicious stock. I have never been at all squeamish about dismantling a turkey carcass for soup including using a hammer to crack the bones. But, when I was turned into Madge the Manicurist for these little chicken parts cutting off their nails, I was forced to come to terms with the creaturehood of my food source. This connection is not a bad thing. 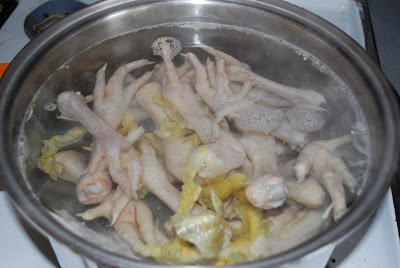 First you boil the feet for five minutes. This step is really about washing them. 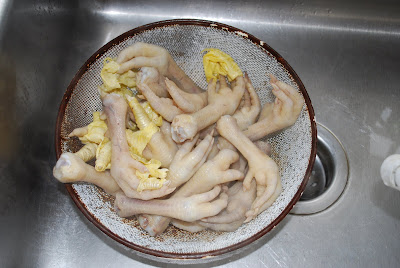 Then drain and cool. Remove any hanging outer skin and clip toenails. For full recipe see the websites referenced above.
Posted by Leslie at 6:54 AM No comments: 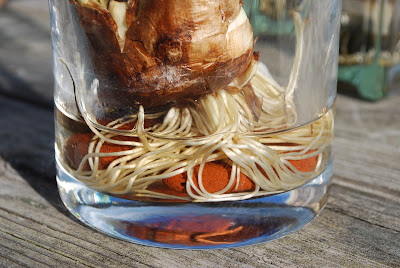 I came up with a perfect solution to drooping paperwhites. You know how they are all straight and tall until they start to bloom? Well I decided to put them in flower vases instead of dishes this year. 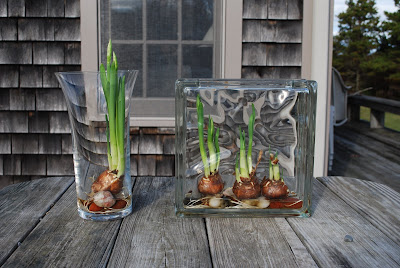 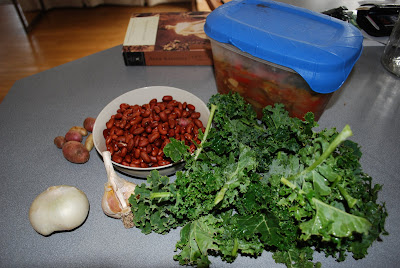 Well despite my whining that I have nothing in my fall garden I did decide to make a soup that is entirely from ingredients from my garden. First I found some old Vermont Cranberry Beans that I had harvested two seasons ago and soaked two cups of beans overnight. Then I gathered a few potatoes that emerged when I was cleaning out the potato bed the other day. Add to that some kale and garden onions and garlic and I had the beginnings of a respectable kale soup. 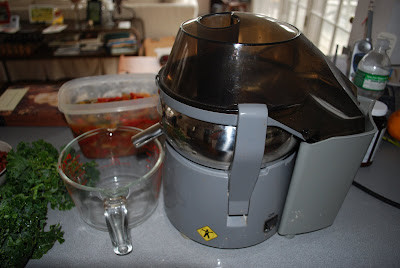 But the real flavor enhancer came from the freezer. It was a ratatouille. I decided to run it through the juicer and use its juices in the soup. It yielded about 3 cups of rich liquid. 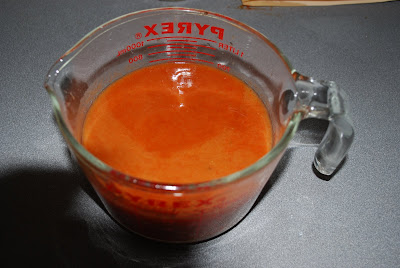 It is a very tasty fall soup. A similar recipe is here.
Posted by Leslie at 6:39 PM No comments: 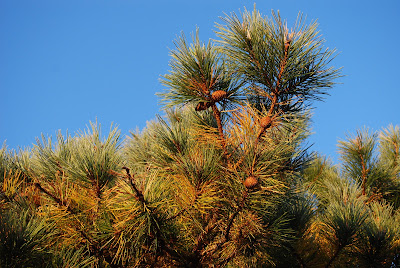 When I first built this raised bed garden, I put wood chips in the pathways. They did not do a very good job of holding down the weeds. For the last three years I have resorted to filling the pathways with pine needles from the scrub pines I have growing in the yard. 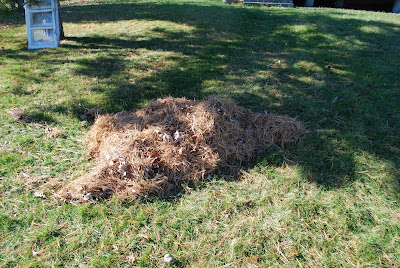 First I rake and spot weed the pathways. Then I fill it in with the pine needles I have raked up. It is the kind of job you can do one row at a time. I'll probably complete half of the rows this winter and the other half next spring. The acidity seems to hold down the weeds. 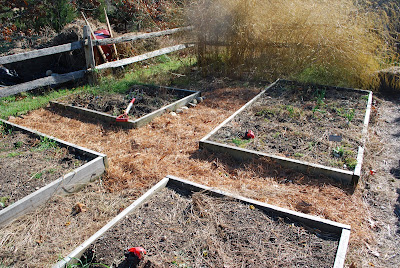 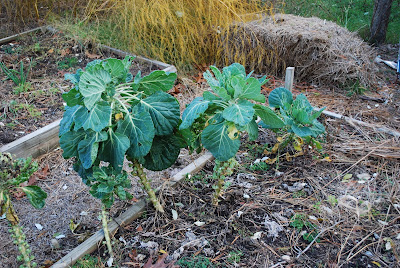 Every now and then it is good to write about what does not work out in the garden. So this is an entry about what is NOT ... not about what IS.

How is it that I have ended up with nothing in my garden this fall? Was it my foolish affair with 33 tomato plants? Was it my THINKING that I was putting in Butternut squash but it turned out to be summer squash? (In the end I had fresh zucchini into October) Was it my decision NOT to plant sweet potatoes this year?

And what about what I did plant? I have Swiss chard that will not grow (why IS that?) And THE saddest looking Brussels sprouts on the entire planet. About the only thing that produces is some not very energetic kale.

Perhaps it was simple lack of planning. Or maybe it was laziness. I COULD have cleaned out that bed of green beans and started some rutabaga.

So I have been out searching answers to my failed crops. Let's start with the Swiss Chard. I planted it late in the fall and I bought plants from a local garden center. I think next year I will plant in spring and sow directly in the ground. I will try a variety like Fordhook Giant. I will also sweeten up the soil with a little lime.

As for the Brussels Sprouts. I made a choice to hand pick the cabbage worms this summer. Now if only I had a good recipe for cabbage worm soup, I would have had a harvest. So next year I will sweeten up the soil with a little lime, I will water more faithfully than I did this season, and I will side dress with a nitrogen fertilizer when they are a foot tall. And I will either cover the crop and or use some Safers garden dust. And I will sacrifice the bottom 6 leaves or so and top off the plant as frost approaches. And in case you do not believe me when I say this is a puny crop. 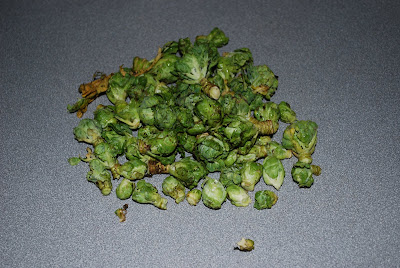 Here is a pile of sprouts BEFORE cleaning 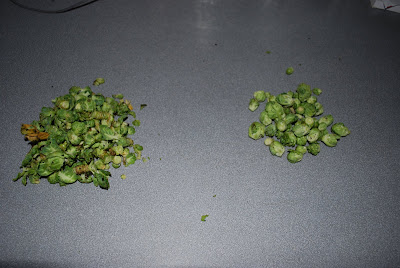 and on the right is what I yielded AFTER cleaning 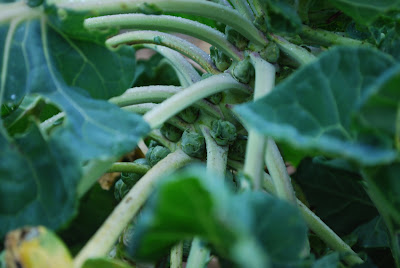 Posted by Leslie at 7:01 AM No comments: 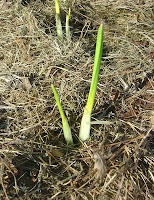 It has been a month since I planted my garlic. Nearly all varieties have poke through the grass mulch. Mostly they are busy making roots right now. Tis is a good time to check the crop for any doubles that might have ended up in the ground and to separate them. These two 4x8 raised beds provide room for about 180 head of garlic. You would think that would be enough for a family of two. And usually it is, but this year for some reason I am going through my 2008 crop much faster. Part of the reason is that I relied entirely on my own crop for seed garlic this year. That reduce the crop by 12%. And this summer I was pretty generous in giving it away 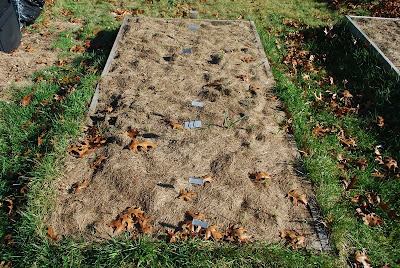 One variety is called Place Monge. I named it from a head of garlic I bought at the Sunday organic market in Paris two summers ago. I have actually never tasted it ... each year I have plowed my entire crop into seed for the next year. I now have three rows of it. Other varieties that have done well this year are Carpathian, a Rocambole from Poland, and Pskem, a Purple Stripe from Uzbekistan.

When I had finished my planting last month, I had no room left for a softneck variety that had done quite well called Loicano. So I prepared a small patch of a 4x4 bed in the garden and planted two rows of it. 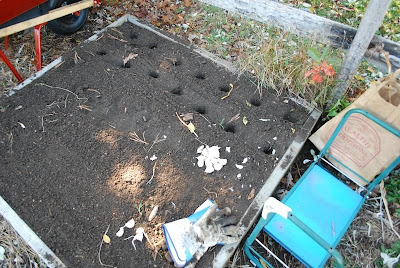 A good place to browse through pictures of seed stock is at the Heirloom Vegetable Garlic Archive. And the best place to buy seed stock that I have found is Filaree Farm in Washington State.
Posted by Leslie at 7:06 AM 2 comments: 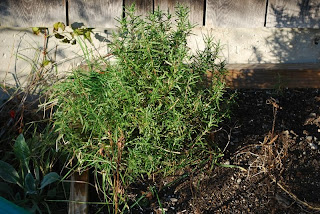 I solved the problem of how to over winter rosemary in New England. Last year I successfully used the a wall-o-water to protect my rosemary plant from winter frost.

I have heard people describe working with wall-o-waters as trying to wrestle with an octopus. I have found a way that takes out the wrestling component. 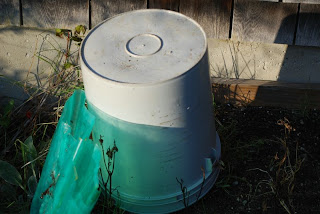 Place a bucket over the rosemary plant. 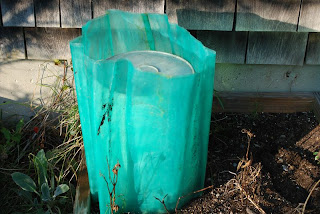 Slide the empty wall-o-water over the bucket. Then fill the sleeves with water going 12 to 6 and 3 to 9 and then filling in the sleeves in between. When all 24 sleeves are filled with water, slide out the bucket and the wall-o-water will make a little tepee around your rosemary plants. 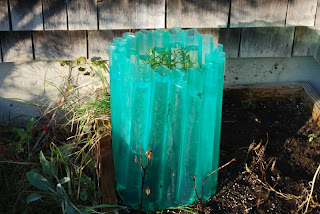 Why I failed to think of this as a solution to my artichoke problem, I cannot imagine. But last spring, when I uncovered my winter protection to find not a trace of artichokes, it dawned on me. Why not try the wall-o-waters here? Maybe this year???? 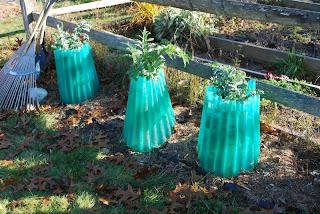 Getting Back in Gear

Now that election season is over and I have securely delivered Virginia to the blue column, I am back here for garden clean up. I have decided that for the next week I will write EVERY day about SOMETHING in the garden, no matter how small. I have been editing myself lately saying ..."Who's interested in THAT?" or "I wrote about THAT two years ago." No more self editing. 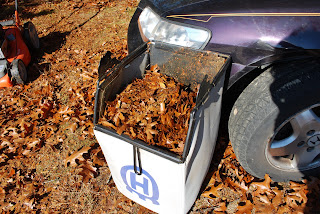 So let me tell you what I did yesterday. My compost operation suffers from a lack of brown. So I decided that this year I would use the lawn mower to "collect and chop" the leaves and bag them for use during the year. So simple !!! Make one pass under the tree and the basket fills right up. Slide a plastic bag over the catcher and turn it upside down. 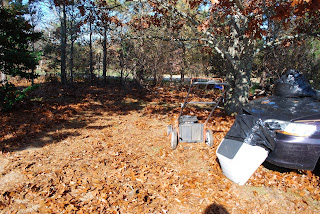