The Lessons of Necessity

I returned to the garden on Thursday evening to find that good friends had tended faithfully to the watering chores and saved me from this very dry late spring and early summer.  I am deeply grateful for what they did. 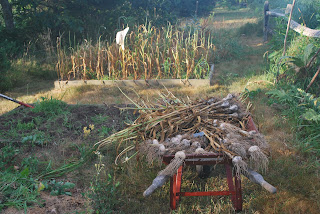 I had made an executive decision to stop watering the garlic beds after the scapes had come and gone.  All the literature says to avoid watering after then to keep bulbs from splitting.  But normally I would harvest the garlic when the bottom 4-6 leaves had turned brown.  Given the early season, that date might have been July 1.  This crop was brown as toast from top to bottom when I returned, and I worried if maybe I had made a mistake.

One of the reasons you want to harvest earlier rather than later is to avoid THIS: 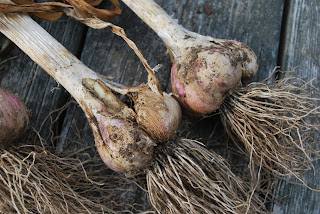 Only 3 head out of 200 harvested had this problem.

The truth is the bulbs were bigger than ever.  They had actually been curing underground in the dry soil and what ever moisture they might have needed, was provided by their very deep roots.   It is an EXCELLENT crop. 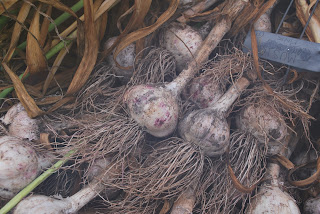 So if there is a lesson here it is that you CAN leave garlic in the ground longer than I thought, and as long as Mother Nature does not interfere with soaking rains, there is little risk to your crop.
Posted by Leslie at 7:48 PM