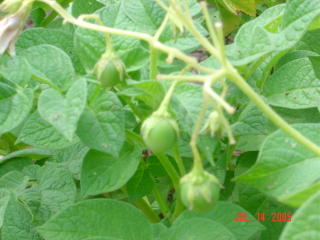 A new mystery confronted me the other morning. There on my potato plants where the flowers had been were little fruit! A quick internet search revealed that my little discovery is the stuff of research grants. Here is a commentary from a geneticist at Cornell.

What is that fruit? You mean the green berry that looks like an unripe tomato? The potato fruit looks like a tomato because the potato and tomato are closely related. Like tomatoes, the potato fruit contains seeds (300-500 per fruit). Potato breeders typically create and harvest several hundred thousand of these seeds each year. These seeds are then planted, and the resulting plants are sifted through over a period of 10-12 years in order to identify new genetic combinations that are good enough to be released as new varieties. Unlike tomatoes, however, the potato fruit is not edible because it contains high levels of toxic glycoalkaloids.

I think it best that I make sure these little fruit are picked if any children should wander through the garden. Apparently they only show on certain varieties like Yukon Gold. (I have Yellow Finns.) If they HAD been growing in the past I wouldn’t have known it because the CPB’s had pretty much wiped out the possibility.
Posted by Leslie at 7:18 PM

I have the same fruit on my potatoes. I had never seen them before either, very strange looking. So.... can we plant them? Would it then be two years before we have potatoes?
Hmm...

Tomatoes, potatoes, eggplant, and peppers are all members of the nightshade family. Wild ("deadly") nightshade is a common flowering weed and produces very similar small berries--which birds can eat (I think they have special enzymes that allow them to deal with the alkaloids) but which can cause serious harm/death to humans. See http://en.wikipedia.org/wiki/Atropa_belladonna for more info!

Incidentally, all fruits of the nightshade family contain at least small quantities of these alkaloids. Birds can process them better than humans, and humans better than carnivores--for instance, I understand that tomatoes (particularly tomato sauce) can be toxic to dogs and cats.

You could raise plants from the seed of these fruits, but they may not "breed true" if the parent plant is a hybrid.

It's pretty much a guarantee that they WILL NOT breed "true" under any circumstances. That's why potatoes are propigated by cloning, rather than by seed.